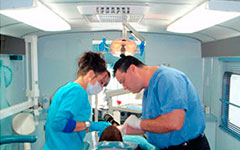 Certain bone morphogenetic proteins, or BMPs, have been studied for decades because of their remarkable ability to heal bone and eliminate the need for bone graft harvesting from other parts of the body. BMP is what is known as a “stem cell inducer”. These proteins are widely used for their ability to induce immature bone cells to differentiate and promote the formation of new bone and cartilage. While BMPs are found in small quantity in the human body, utilizing isolated recombinant BMP (rhBMP) during jaw bone reconstruction has demonstrated a clear clinical value.

Bone morphogenetic protein type 2 (BMP-2) a human endogenous growth factor is the active ingredient in commercially available bone grafting material, INFUSE (rhBMP-2.) This BMP is the manufactured version of a protein already present in the body that promotes new bone growth. Approximately twenty (20) BMPs have been discovered, but only six appear capable of initiating bone growth. Of these, rhBMP-2 has been studied more than any other BMP and INFUSE is FDA (Food and Drug Administration) approved for use in certain spinal, tibial as well as oral and maxillofacial surgical procedures. The recombinant form of BMP-2 is identical to the natural form both in its chemistry and its ability to grow new bone. As far as the body is concern, it does not know that the recombinant form is any different than the endogenous one.

Naturally occurring BMP, as mentioned earlier, is found within the bone itself only in very small amounts. To provide clinically useful and reproducible amounts of isolated, human BMP, it must be manufactured in a special facility. During surgery, rhBMP-2 (INFUSE Bone Graft) is soaked onto an absorbable collagen sponge (ACS) which then binds to it, and this is how it is implanted into the site. As the sponge dissolves, the rhBMP-2 stimulates the cells to produce new bone. It is designed to resorb and disappear over time. The rhBMP-2 also goes away once it has completed its task of initiating the differentiation and promotion of normal bone production and healing process.

In the facial region, BMPs are used to promote bone growth in several areas. In instances of jaw bone loss and resorption, rhBMP-2 may be placed in the section or sections of the jaw bone that need to be built back up in preparation for dental implants or any other surgical procedure, such as the maxillary sinuses and jaw ridges. One of the major benefits of BMPs is that it reduces the need for aggressive harvesting of natural bone material from the body, such as the hip. This cuts down on the surgical risk, time and cost associated with traditional autogenous bone harvesting techniques. Because BMP does rely on the need of stem cells presence, this procedure requires a small sample of your own bone. Typically, this can often be taken directly from the site where the grafting will occur. In addition, we will also use other “scaffolding” materials such as a processed human bone products (allogeneic/allograft bone.) This material along with INFUSE can predictably form bone in areas where other methods have proven very difficult or not possible. Whatever the cause, it is important to understand that modern oral and maxillofacial surgery allows us to restore facial and dental jaw bones safely and predictably because of one of our newest, safest and most predictable options for doing so, the use of recombinant bone morphogenetic protein, rhBMP-2. 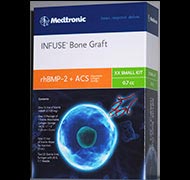 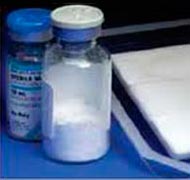 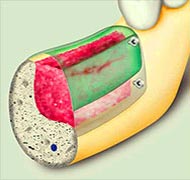