A dental tooth impaction is defined as those teeth that fail to erupt completely into the mouth in their expected appropriate position. The most commonly impacted teeth that fail to erupt, after the wisdom teeth, are the maxillary canines. Canines or cuspids are teeth located between the premolars and the incisors. An impacted canine means the tooth has either failed to grow in completely or has partially erupted through the gums. The impaction can result because there is not enough space for the tooth to grow in, the tooth grows at an odd angle or due to overcrowding. Generally this can be described as a delayed or diminished jaw growth in relation to when the tooth is expected to erupt; a lack of synchronous development between tooth eruption and jaw growth. A domino effect can be created that can cause all of the teeth to be crooked when an impacted canine grows at an angle against the other teeth pushing toward the next tooth, and that tooth is then forced to push against another teeth as well. Permanent damage to root structures of lateral incisors or premolar teeth is very likely.

Normally, the maxillary cuspid teeth are the last of the front teeth to erupt into place. Before the canines actually come in, space is created by the teeth through jaw development and expansion. They usually come into place around age thirteen and cause any space left between the upper front permanent teeth to close tight together. The cuspid tooth is a critical tooth in the dental arch and plays an important role in overall stability of the bite. The cuspid teeth are very strong biting teeth which have the longest roots of any human teeth. When a canine tooth is impacted, most of these are hidden and the impacted tooth will most likely be overlooked.


If a cuspid tooth becomes impacted, it is made to erupt into its proper position in the dental arch via a technique called an exposure. The technique involved to aid in its eruption can be applied to any impacted tooth in either the upper or lower jaw, but most commonly they are applied to the maxillary cuspid teeth. Most of these impacted canine teeth are located on the palatal side or roof of the mouth of the dental arch, although the crowns of impacted canine teeth can also position themselves in the middle of the supporting bone (i.e. jaw ridge) or on the lip side of the mouth. These are far and few as compared to those lying of the roof of the mouth.

Exposure requires knowing where the location of the tooth is. Exposures can be done with any type of anesthetic if the tooth is not too deeply impacted. If this is the case, either IV sedation or general anesthetic is preferred. In addition, because of the age of patients when canines are generally exposed, these being children who the procedure becomes too much for them emotionally if they are fully aware of what is occurring, general anesthesia is recommended.

The exposure technique involves opening the gum, extracting any obstructing tooth, generally the primary canine, removing any bone or soft tissue overlying the crown of the canine and them bonding an anchoring device called a bracket and gold chain on to the tooth. Sometimes the tooth is also subluxated to ensure the tooth is not stuck in the bone. The tooth is finally activated at surgery using a rubber band-like ligating suture to start moving the tooth immediately. This anchoring device will then allow the orthodontist to subsequently pull the tooth into the mouth and position it in its correct location. Most patients visit their orthodontist about two weeks later to continue the activating forces required for the eruption of the tooth. The orthodontist will eventually remove the bracket and chain device once they are able to place a regular orthodontic bracket. 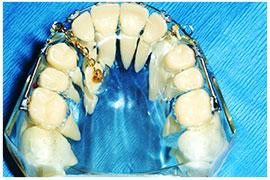 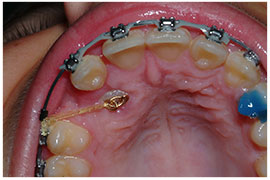