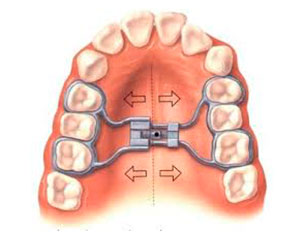 Surgically assisted rapid palatal expansion (S.A.R.P.E.) is a combined orthodontic and surgical procedure which facilitates an increase in transverse maxillary width both in children or adults. The procedure is generally done because the upper jaw generally does not expand during development in order to accommodate all its teeth in the dental arch causing significant crowding, malpositioned and misaligned teeth.

The maxillary arch generally has a very deep, constricted palate and orthodontic treatment alone cannot correct for this dentofacial growth discrepancy. Prior to surgery, the patient will require a custom-made, specialized orthopaedic expanding appliance made to fit in the palate, cemented to the first molars and premolars which is activated with a special key that turns a screw within the expander to allow for separation of the right and left side of the upper jaw. The expander also functions as a retainer after the expansion has occurred.


The procedure is done in Our Center as an outpatient procedure under general anesthesia. Many different surgical techniques have been described, but surgically speaking, the patient has the upper jaw surgically fractured using specialized instruments to perform multiple bone cuts in specific locations that will separate the patient’s upper jaw into movable bone segments to symmetrically expand the arch once the expander is activated. No fixating devices are used other than the expander. The patient over several months uses the specialized key twice a day to achieve daily minute expansions. Generally, the two front teeth will visibly show a drastic separation until the desired amount of distance and space is obtained. At this time, the orthodontist will keep the expander in this position. The expander will stay typically in the mouth after the expansion has been achieved for about three months at which time it is removed. Orthodontic treatment to close the space between the two front teeth will start once the space is obtained, and the remaining movement of all upper teeth starts into there corresponding position.

The patients generally do not find the procedure to uncomfortable or painful although significant swelling occurs. They are followed very closely during the first two weeks to insure that no complications are encountered. Patients are generally given a soft chewing diet. Although they can chew foods, immediately after the procedure soft foods are recommended. 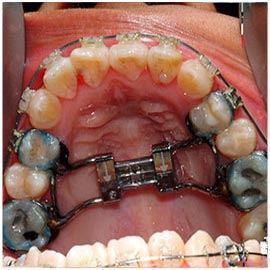