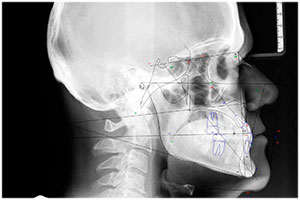 Corrective jaw surgery, or orthognathic surgery, involves the use of corrective surgical procedures to surgically cut, spatially positioned facial and jaw bones and fix bone abnormalities, bite and teeth problems. Corrective jaw procedures are reconstructive facial surgeries which align facial bones, jaws and the bite that have developed in an disproportionate manner causing a poor bite (malocclusion) and difficulty chewing. Generally facial disharmony develops as a consequence of this asymmetrical and disproportionate growth. These abnormalities can include airway defects, severe bite problems, cleft palates, sleep apnea, and temporomandibular joint (TMJ) disorders. These medical conditions often interfere with daily activities, such as eating, chewing, talking and sleeping. Jaw surgery corrects these problems, in addition to improving the overall appearance of the face. The primary goals of jaw surgery are enlarging airway passages, achieving a correct bite, and providing a more aesthetically pleasing physical appearance. These abnormalities start developing in young teenagers and they might not fully manifest themselves until growth stops. The treatment almost always also involves the need of orthodontic treatment (braces) to insure the bite is perfectly aligned, and the whole treatment process which includes both the surgical and orthodontic treatment can last up 18 to 24 months or more.

Upper jaw surgery, called maxillary osteotomy, is primarily used to treat overbites, under bites, and open bites (apertognathia.) The surgeon moves the upper jaw along with the teeth until the bottom and top teeth are properly aligned. Tiny metal (titanium) plates and screws are used to hold the jaw in its new position.

Lower jaw surgery, called mandibular osteotomy, is used to correct a deficient or receded lower jaw, referred to as retrognathia, or a large protruding lower jaw, referred to as prognathism. Lower jaw surgery, involves surgical cuts behind the back molars so that the front of the jaw is able to be moved either forward or backwards. The surgeon then slides the lower part of the jaw into its new position, again inserting screws and/or plates to fixate the bones in their proper place.

Chin surgery, also called a genioplasty, is used to correct deficient and receded or forward and over projected chins. This surgical procedure strategically involves cutting and moving only the chin bone from the lower jaw. The chin, in addition, can also be either moved upwards to make it look shorter or downwards to make it look longer. Sometimes the chin bones are also needed to be moved backwards or forwards to allow the patient's lips to close more naturally. Chin abnormalities are often accompanied by a severely receded bottom jaw, and surgeons typically perform the two corrective procedures at the same time.

Corrective jaw surgery preparation typically requires input from the maxillofacial surgeon, the patient's orthodontist as well as a primary care physician. Occasionally, a psychologist might be asked to provide a professional assessment on whether the patient will be able to emotionally handle the resulting changes in appearance. Digital imaging computer software, X-rays, facial and cephalometric evaluations and analyses as well as bite molds (casts) are used to determine which type of jaw surgery would best meet the patient's medical needs, and to preoperatively perform the desired 3D surgical jaw movements in articulated models of the patient. General anesthesia is always used. Although these procedures were traditionally done as inpatient procedures, we are now able to perform these as outpatient procedures with stringent postoperative follow up visits. A majority of healing occurs during the first two (2) weeks after the surgical procedure even though there are still some aspects of normal function which can take longer such as the ability to eat normal foods which is generally delayed until the bones completely heal in six (6) weeks. The recovery period commonly involves swelling, congestion, difficulty chewing and some mild to moderate pain adequately relieved with pain medication. 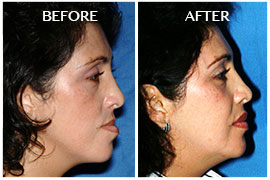 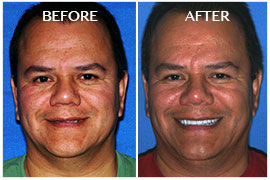